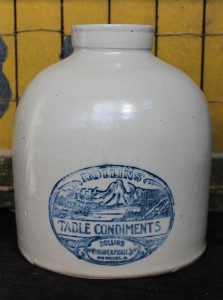 The Red Wing Collectors Society is made up of more than 3,000 members worldwide who collect stoneware crocks, jugs, churns, dinnerware and art pottery manufactured in Red Wing from the 1880s to 1960s. The February event helps tie collectors over until the next RWCS National Convention in Red Wing in July. Both events serve as great opportunities for members to connect over Red Wing and learn about the history of the potteries that once operated in Red Wing, their diverse production lines and the impact they had on the American pottery industry.

The event will kick off with a Friday night social for attendees in the hotel ballroom from 6 to 8 p.m. on Feb. 23, but as with any large antique event, the opportunity to buy and sell is top of mind for collectors and dealers. In this case, the RWCS MidWinter GetTogether never disappoints. Many attendees will prop open their doors and sell Red Wing wares from their hotel rooms during the event – some starting as early as the night of Tuesday, Feb. 20. A formal Show & Sale will run from 1 to 4 p.m. on Saturday, Feb. 24 followed by an auction at 5 p.m. – both of which are open to the public. Auction proceeds will benefit the Pottery Museum of Red Wing and more information can be found at www.houghtonauctions.com. Whether you’re new to collecting Red Wing or an experienced collector, anyone and everyone is invited to attend this fun event and find a new piece for their collection.

Education is also a major focus of the event. Collector Joe Grout will give a keynote presentation on the Red Wing Stoneware Company’s production in Iowa through Ft. Dodge and Plymouth Stoneware. RWCS Hall of Fame members Larry Roschen and Terry Moe will present on less common Gypsy Trail dinnerware. Mark Wiseman will present on potteries in Marion County, Iowa and Jeff Birchman will cover Red Wing beater jars and their use as a merchant premium. Debra & David Giesen will lead a round table discussion on collecting Red Wing and Danae Quirk Dorr will present an in-depth discussion on Red Wing’s North Star Stoneware Co, which only operated from 1892 to 1896.

All activities will be held at the Holiday Inn Hotel & Suites at 4800 Merle Hay Rd in Des Moines, Iowa, which is located at the intersection of I-35 and I-80 in Des Moines. Visit www.erwcs.org to register or learn more about the MidWinter GetTogether.

The 42nd annual Red Wing Collectors Society Summer Convention is slated for July 12-14 in Red Wing, MN. Annual membership in the Red Wing Collectors Society costs only $35 and includes five 16-page full-color newsletters mailed to your home throughout the year. The RWCS was founded in 1977 in Red Wing and there are more than 3,000 members worldwide. For more information or to become a member, call the RWCS business office at 651-388-4004, e-mail membership@redwingcollectors.org or log on to www.erwcs.org. You can also join the RWCS on Facebook and follow it on Twitter at @RWCollectors