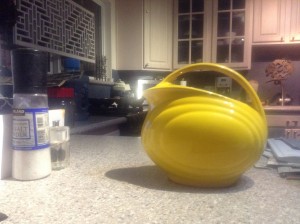 We have a yellow pitcher with a contemporary three oval relief design on two sides. It is approximately 7 3/4″ tall and 7 5/6″ wide The bottom of the vessel has embossed the letter C in a circle and the words Red Wing Pottery Inc. design patent pending USA.  It was my husband’s grandmother’s pitcher. It is has a history in 1940′s but could back as far has the name change 1938. I want to know the design history. Is there  a patent? And if so what is the patent number. I located a red tea pot like my pitcher, but have no other info. My husband is clueless as it’s history.

The item in the photo is a yellow ”Streamlined” water jug or pitcher. In 1940 Red Wing introduced several items under the ”Streamlined” banner as part of the company’s rapidly expanding Gypsy Trail Hostess Ware line. Each piece in the Streamlined group had a design on each side that consisted of three raised ovals of decreasing size on top of each other. The items were a 64 oz water jug, covered ice box jug, 8? and 9? covered casseroles, and 2 cup and 5 cup covered teapots. The water jug had an over-the-top handle and was the only Streamlined item that did not have a cover. By June 1942 the water pitcher was the only remaining Streamlined item in the catalog and by 1944 it too had been discontinued. In later years the pitcher as listed as “Modern” rather than Streamlined. This pitcher was available several colors including yellow, blue, turquoise, orange, pink, green and cream ivory.

All of the Streamlined pitchers I’ve seen are bottom marked with same “Design Pat. Pending” wording along with the copyright symbol.  Most likely a patent was eventually issued but I am not certain of that, nor do I know the assigned patent number. Value for a yellow Streamlined pitcher in excellent condition is around $50-60.