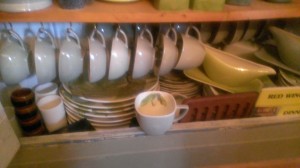 Hi – I’ve been looking for years for additional coffee cups for my set of Red Wing Magnolia.  I have many tea cups, but only a few of the coffee size.  Are they very rare?  Or do I not have the right name for them?  Any help would be GREATLY appreciated!

Red Wing literature calls the shallow cups “tea cups” and the deep sided cups “coffee cups”.  The Magnolia pattern is one of many produced in the Concord shape.  Concord was introduced in 1941 with the Lexington and Harvest patterns, and tea cups were among the items available from the beginning.  Over the years new patterns and new pieces were added to the Concord line.  Magnolia was introduced in the late 1940s and was made until 1956.  But the coffee cup was not added to the Concord line until 1954, long after the introduction of Magnolia.  So while the Magnolia pattern was made for nearly 10 years, Magnolia coffee cups were available for only two of those years.  Thus they are considerably more difficult to find than tea cups.  Magnolia coffee cups aren’t really rare, but they certainly qualify as scarce.  Good luck in your search!

I am hoping you might  direct me to someone who can tell me the best way to remove a snow scene painted on my rust colored pitcher.  I would like to restore it to its original color but do not want to damage the glaze.  I do not know what kind of paint was used.  It does not appear to be oil but could be acrylic.  The entire pitcher, inside and out has been covered with greyish blue, matte finish paint.  There is one spec of the original color on the bottom.  It appears it may have been dipped for the background  color and then the snow scene was painted on top.

Any suggestions would be greatly appreciated and I thank you very much for your time.
Sue

Sorry but I don’t have a sure answer to this question as I have no experience with removing a large area of paint from dinnerware.  Especially when the type of paint involved is unknown.

Here is what I would do if this were my pitcher and I was certain that I wanted to remove the painted scene, knowing it might look worse afterwards if my efforts are not successful.  First, run hot water over the pitcher to see if the paint happens to be water soluble.  If the water has some effect on the paint, soak the pitcher for a while to soften it.  Gentle scrubbing with a non-metallic kitchen scrub pad may help.  If that doesn’t work, try using a razor tool to remove the paint. Be sure to use a new razor, not a previously used razor that might have nicks in the blade.  Careful, gentle but firm scraping should remove paint but until you try it’s impossible to gauge how successful this will be.  A lot depends on the type of paint involved.

Hopefully the paint is now gone and no further steps are needed.  I’ve used water and razor to successfully remove paint splatters from dinnerware, but not large areas like this painted scene.  If paint still remains, my next step would be to try a solvent of some kind.  I’d try adhesive remover, paint thinner, and nail polish remover in that order.  If the glaze on the pitcher is intact then these solvents won’t harm it.  Again, I’ve used these solvents on small spots but not on large areas.

I’m not sure what to do if paint remains after the above steps have been tried.  Harsh chemicals or more intense scraping may harm or dull the glaze.  I’d probably try paint or furniture stripper as a last resort but I have no experience with using them on dinnerware.  Do not rub the pitcher with metallic pads (steel wool, Brillo pad, Chore Girl, etc) as they will leave metallic marks on the glaze.

Scraping of any kind will be difficult for the area inside the pitcher.  If water or a solvent has no effect on this paint, consider leaving the pitcher as is with the painted scene intact.

Hello:
I came across your informative article on cleaning dinnerware,etc.
I have a Redwing Chef Pierre cookie jar that looks like it may have had grease stored in the bottom—so there is browning.
Do you think the 40% peroxide would work on this? What about the hot water in a dishwasher?
Any advice appreciated!
Trish

The greasy stains at the bottom of the Chef cookie jar are most likely the result of being used for its intended purpose, storing cookies.  Cookies contain oils and fats, and the glaze on these jars were often susceptible to penetration by grease from the cookies.  Such stains are very common.

I doubt that hot water or a run through a dishwasher would be of much help in removing these stains.  Water and oil don’t mix, so water won’t displace the grease that is present under the glaze.  While I have not used hydrogen peroxide to clean a Chef cookie jar, I have used it to successfully clean other stained Red Wing items made in same era with similar glazes. No guarantees of course, but I am confident the cleaning process described in my article will improve the appearance of your jar.  Good luck!

I went to your site in hopes to find out if this is Red Wing dinnerware.  It is very
lovely, has the same flower as Orleans pattern, but different bowl trim.  I would like to offer it for sale in my shop, but need to know when it was produced and value.  Thank you Jan

The photo shows a covered casserole and covered cream soup in the early version of the Normandy pattern.  It was one of four patterns in the Provincial shape introduced
in 1941.  This early Normandy version was made for only about one year; it is not included with the other three patterns in a 1942 catalog.  The early version of Ardennes was discontinued a few years later.  Both patterns were revised and reintroduced in 1949.  This more common version of Normandy with the prominent red apple was produced from 1949 to 1952.

Early Normandy is considered rare and quite valuable today.  As with all dinnerware the
value depends on condition.  In excellent condition, the cover casserole would be worth $75-100 and the covered cream soup $40-50.  Crazing and stains are often found in Red Wing dinnerware made in the 1940s.  Any damage including chips, nicks, cracks, stains, and hairlines will reduce the value considerably. 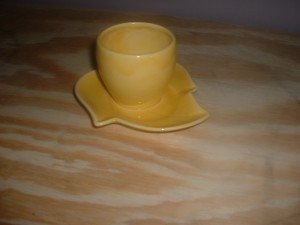 This item is from the Gypsy Trail dinnerware line and was produced in the early 1940s.  The catalog called this item a marmalade jar.  Yours is in the shape of an apple but is missing the cover.  I’ve attached a photo of a an apple marmalade jar with cover.

Red Wing made marmalade jars in a variety of styles, shapes and colors.  The shapes include apple, pear and pineapple.  Colors include yellow, turquoise, blue, orange, pink, and light green. Marmalade jars were available with an attached stand (under plate) like yours or with no stand.  Red Wing also made a stand-alone stand could be purchased to go with jars without an attached stand. 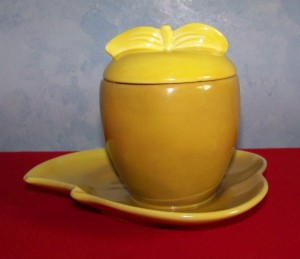 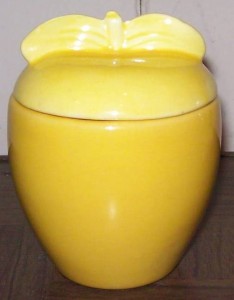 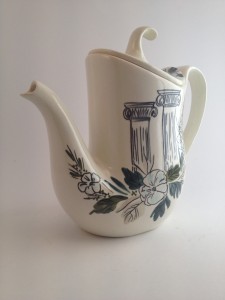 I picked up at auction last week a box of RW which included a Futura Colonnes teapot in new-looking condition (no crazing, chips, cracks, or signs of use.)

The “ask the experts” info on your site (which I adore) rates this pattern as both a desired collectible, and uncommon.  I am unable to find a price range for it.

1.  how does one establish a fair price?

2.  what venues exist to sell an unusual piece– besides antique dealers and e-bay?
again, I am most grateful for any advice from the experts.

The Colonnes pattern was for only one year (1957), thus it is difficult to find today.  As with most patterns the teapot is among the more highly sought pieces in the Colonnes
pattern.  A Colonnes teapot in mint condition would be worth around $200 to a knowledgeable collector.

Please see the FAQ
section of this web site for advice on selling Red Wing. 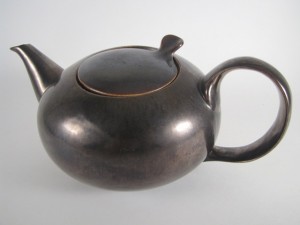 Over 20 years ago I bought this tea pot at an antique shop in NW Tennessee. The  hear beauty of the shape drew me to it. Every time I looked at it over the years it brought a  ense of calm and smile to me. And it did not take me long to find its designer who I hold in high regard. Now it is time to find another person to enjoy it as much as we have. I  ave looked far and wide to get an idea of its value and after about an hour found your onderful site and group. I now know the glaze color, the design line and that there is  such a devoted group of collectors. Please tell me more like its age and value.

A metallic brown Town & Country teapot is worth $150 to $200 in excellent, undamaged
condition.  Damage will reduce the value by 25 to 75% or more depending on the location and severity of the damage.  The teapot in the photo appears to be in excellent condition assuming there are no hairlines, nicks or other flaws not visible in the photo. 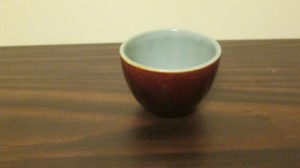 Have a Village Green item with shape and dimensions of a Casual Shape
cup.  Is this a documented item?  If documented what is the official
nomenclature?  Thanks.

Terry Moe found some Village Green cups without handles in a shop several years ago. We have not found any documentation for them. After much speculation we decided
they might be custard cups. We have no doubt they were made by Red Wing but are
not sure why. These cups may have been a special order by a customer, or may
have been a test run that was not well received by the public. They may also
have been among the Novelty and Gift items that were decorated with Village
Green colors but were not officially listed as Village Green items. 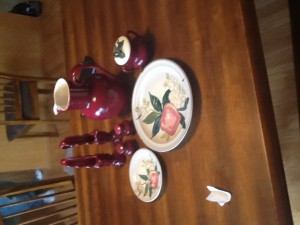 My grandma recently passed away and I got this pottery.  Just wondering if you can tell
me about it.

Thanks for the info. I can’t tell if its a 2 or a 9 so I took a picture.  The only info I have is
my grandma got this before she was married so I assume its pretty old.

The dinnerware pattern you have is called Normandy. This pattern is part of the Provincial dinnerware line of the 1940s. Here is an article about the line and pattern from our website:

The covered sugar bowl and the salt & pepper shakers are worth $20-25.  I can’t tell from the photo if the smaller piece is a small bowl or small plate, but either way the
value is $7.50 to $10.  All values assume excellent condition. Larry Roschen

The candlesticks are art pottery, value is around 35.00 for the pair.  thanks,
steve n rose

Hi.   I have a question regarding the Anniversary Line of dinnerware, specifically Country Garden.   I’m not sure who else to ask this question of, and you are the only contact name I have that might be able to direct me.

My question is:   There are several different bowls: Cereal, Rim Soup, Sauce, Nappy and Buffet.    The Red Wing Dinnerware price and identification guide doesn’t indicate the size of each bowl.   If I see a bowl, how do I know which one I’m looking at?   Is there a size guide?

I am not aware of any reference guide or book that includes bowl sizes for Red Wing dinnerware patterns. That’s useful information, and over the years I’ve developed my
own list.

There were seven different bowls made for the Anniversary patterns. Here are the approximate diameters of those bowls:

Another clue to help differentiate the bowls is the hand painted design inside the
bowl.  Larger bowls have more surface area and thus room for more art.  For example, the Country Garden buffet bowl includes more leaves and flowers than the smaller bowls. Larry