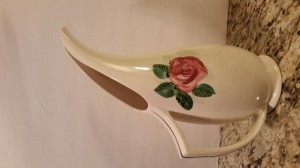 I have the Red Wing Lexington Rose pitcher, 13″ tall but the bottom logo has the black oval “RW 7″. Does this give it more resale value like on eBay rather than $25 you state. From my research, this logo on my pitcher was made prior to the “red” Red Wing logo other dinnerware. I want to know if it gives it more value as this means it’s older.  And real important: do you know the exact year the Lexington Red Wing pitcher debuted?

The Lexington pattern was introduced in 1941.  The water pitcher was among the available items from the beginning.  The red and green colors on early Lexington pieces, including the water pitcher, were lighter.  The rose was closer to pink than red.  The black “upright wing” ink stamp was used to mark items from 1941 until the late 1940s.  This mark is occasionally seen in green or blue.
Sometime in the late 1940s, probably 1947, the “RW” ink stamp was introduced and the colors of the pattern darkened. This mark was used for a fairly brief period and is the least common mark of the three marks used on Lexington items.
The familiar pinkish-red stylized wing ink stamp was introduced in 1950.  The red and green colors continued to darken. Many new pieces were added to the Lexington pattern between the late 1940s and 1955.  Lexington was discontinued in 1955.
In my experience most collectors pay little attention to the ink stamp used to mark a particular piece.  Condition and the quality of the artwork are far more important.  There might be a few collectors who seek to add a pitcher with each of the three logos but there aren’t enough of them to influence market prices. Older doesn’t necessarily mean more valuable when it comes to dinnerware.  Some collectors find the darker colors more attractive, so they place a higher value on the later pieces of Lexington than those made early in production.
Larry R
40 queries in 0.543 seconds.