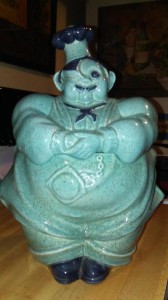 My name is Renee and am looking for some help. We have a Redwing Chef Pierre Cookie Jar that I believe to quite rare. I have been on the RWCS facebook page and have searched online for several days and cannot find any current information about this piece.
My husband has had this for over 25 years and it belonged to his grandmother. Otherwise we have had this and have not used it only for show. The measurements are 12″ high, 22″ around.
What I have found so far is it’s estimated value in 2010. That was said to be $750 – $1000. It’s color is said to be Fleck Nile Blue and there were not many made with this color. Photos attatched.
Please help me.
Thank-you,
Renee L

The “Pierre the Chef” cookie jar was introduced by Red Wing in 1941, along with his friends Katrina the Dutch girl and Friar Tuck. Price lists from 1942, 1943 and 1944 show them as being available in blue, yellow, and tan colors. An undated brochure, probably from the mid to late 1940s adds green as a fourth color. The early brochures refer to the jar as “Pierre the Chef” but eventually he became known as simply The Chef.  These three cookie jars were great sellers for Red Wing. Many thousands of them were made and production continued into the mid 1950s. By then Katrina and Friar Tuck were dropped from production, but the Chef continued on along with several newly introduced cookie jar shapes. A brochure from 1956 lists fleck pink and fleck blue as the only two available colors for the Chef. This was probably the last year of production for the Chef as he does not appear in a 1957 dealers price list.
The blue fleck and pink fleck Chef cookie jars were made for only a brief period at the end of production.  They are far more difficult to find today because few of them were made.
I would estimate the current value for a Nile Fleck Blue Chef cookie jar to be $600 to $750 in excellent, undamaged condition.  Any damage will reduce the value significantly.  Antique values, including cookie jars, have declined in recent years.  This tends to be cyclical, and values are likely to rise again sometime in the future.
Larry
40 queries in 0.487 seconds.