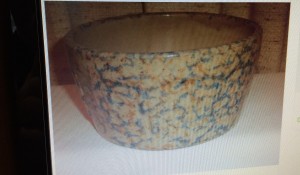 I saw a bowl on eBay with advertising stating “Compliments of Darien Hardware, T. C. Synder, 1940, Darien, Wis.”  The bowl was listed as a Red Wing piece and sold for $81.  The seller stated that although unmarked, it was obviously a Red Wing bowl.  I am not so sure, but would like your opinion.  It is about the same size as a cap bowl, but has no markings and is a slightly different shape than Red Wing cap bowls.  I took some photos from my computer monitor and have attached them.  They aren’t the best photos, but they illustrate the bowl well enough to see that it is not a cap bowl.  Can you help me with the identification of this bowl?  Thanks for your help. 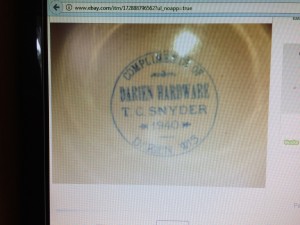 This is a Red Wing bowl. They come in Blue, White, White with blue bands, Albany and sponged . The book doesn’t state a name but I have called them Cactus bowl.