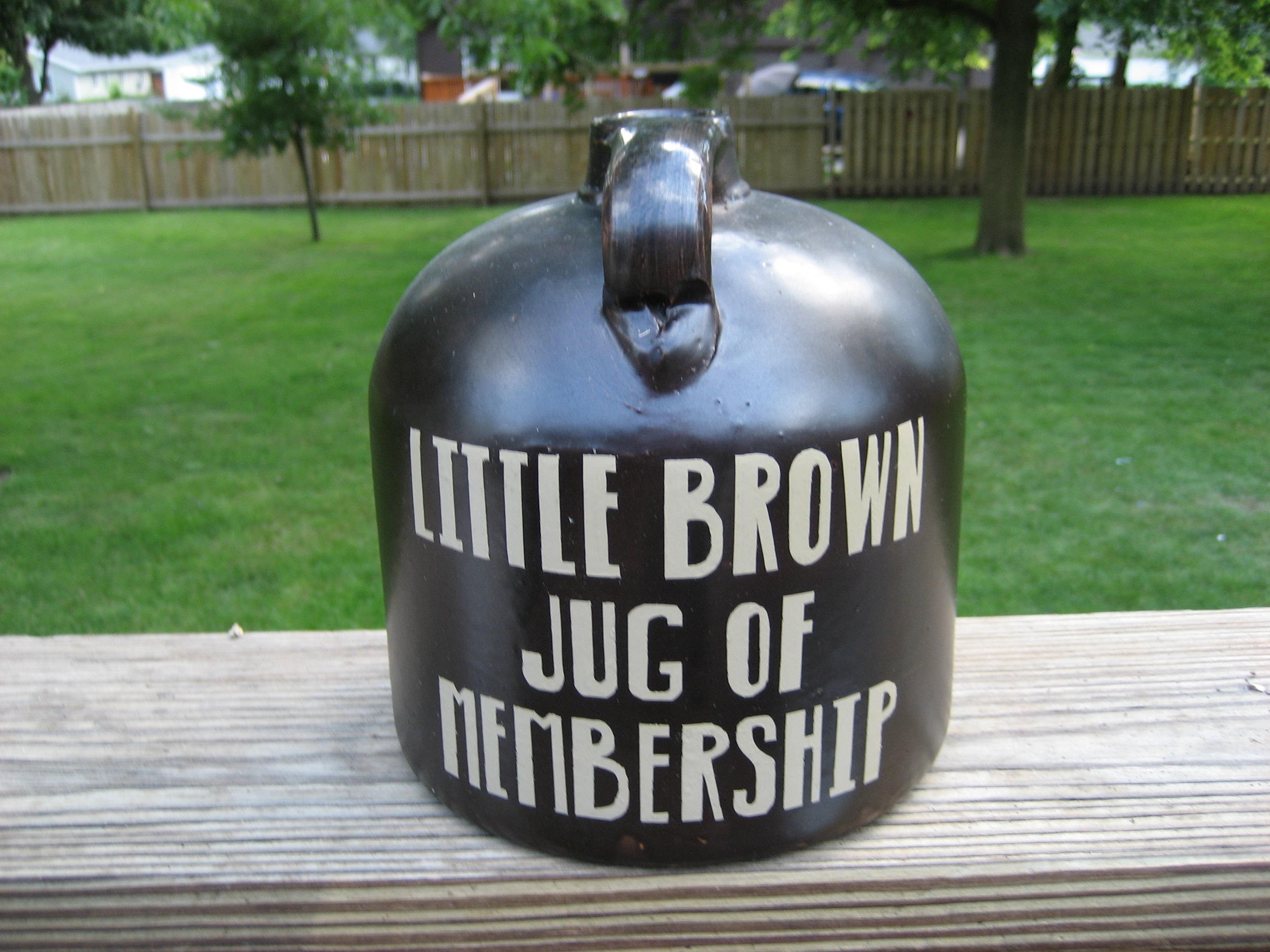 RWCS Facebook Chapter awarded the RWCS Little Brown Jug of Membership. Since 2007, the RWCS recognizes a Chapters efforts to grow the membership of the RWCS.

The RWCS Facebook Chapter, a group on Facebook, was started by the organizations Executive Director. The drive of the current chapter officers including Chris Tinscher and Yoshi Hoffman have brought double digit new members to the RWCS this past year. The Chapter is made up of people from all over talking about Red Wing made pottery and stoneware.

Congradulations to the RWCS Facebook Chapter! Join them today! All members are welcome to join the 24 hours a day Red Wing collector discussion.

The slate is clean Chapters!

Here is more information on the Little Brown Jug of Membership:

What is it?
Like its namesake, the Little Brown Jug rivalry between the Universities of Minnesota and Michigan, the Little Brown Jug of Membership is an annual traveling trophy. The Membership jug is a way to acknowledge the recruiting efforts of our Chapters. The Chapter that recruits the most new members in one year to the RWCS is awarded the jug.

When did it begin?
The RWCS launched the Little Brown Jug of Membership in 2007 during the RWCS’s 30th Anniversary Celebration. The concept was developed by RWCS Executive Director, Stacy Wegner.

Who made the jug?
The Albany slip jug has a North Star mark on the bottom and is hand decorated with “FILLING THE JUG ONE MEMBER AT A TIME” on the front with a Red Wing and “LITTLE BROWN JUG OF MEMBERSHIP” on the back. The design and creation of the jug was done by RWCS member Aarika Floyd in 2007.

How is the data gathered?
When a new member joins they are asked how they heard about the organization and that is indicated in the field provided in the Online Membership System. The information is included on the new member report.

What is the source of New Member report?
Each year the Red Wing Collectors Society Executive Director will generate a new membership report. The list is comprised of new members from July 1 of the prior year through June 30th of the current year.

Who decides the winner of the Jug?
The New Member Report is given to the RWCS Representatives at Large. The Reps at Large will review the list with the Chapter Presidents at their annual meeting during the Convention. Following the meeting, the Reps will decide the jug winner.

What if there is a tie?
In the event of a tie, the Chapters will split the jug possession during the year. Depending on the location of the Chapters it can be transferred at a Chapter meeting or at MidWinter.

When is the Chapter announced?
The formal presentation is at the Annual Business Meeting held during the official RWCS Annual Convention in Red Wing, MN.

Who announces the winning Chapter?
The Representatives at Large report the winner to the Executive Director who presents the jug at the RWCS Annual Business Meeting.

How are the winners recognized on the jug?
The winning Chapter(s) will affix their Chapter logo decal/sticker and the year on the Jug. The jug will be returned to the RWCS Executive Director the following convention in its bag.

How does a Chapter participate?
All Chapters are automatically included each year. They simply need to encourage the new member to indicate them as their recruiter. If an individual Chapter member is named they are counted in the Chapter total.