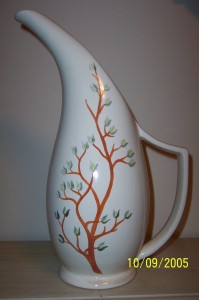 Question: I would like to have Larry take a look at the attached pictures of what I think is the only known Buds pattern water pitcher and see if he can give an approximate value.  I’ve had it for a long time but would now like to sell it.  However, because of its rarity, I really don’t know what the value would be or the best way to advertise/sell it.  What I’d like to do is put it in the Red Wing auction, but since I live in Washington state, with no intentions of being in the Red Wing area during auction time, I guess I’ll have to advertise it some other way. I’m not a big fan of embay.  I can be reached at 206-300-3397.  Thanks in advance.

Buds was a Red Wing dinnerware pattern designed in 1952 that never went into production.  Supposedly two sets of Buds were made to be displayed at a trade show.  The pattern was not well received, and this was reported back to managers in Red Wing.  The salesmen at the show were told to discard the Buds dinnerware and not bother bringing it back to Red Wing.  But apparently a few pieces survived as there are a handful of known Buds items today.
What is the value of an authentic Buds water pitcher?  It’s tough to place a value on an item that is likely one of a kind.  Without comparable sales any estimate is just a shot in the dark.  The photos appear to show an authentic Buds pitcher; I have no reason to believe otherwise.  I would estimate the value in today’s market to be $1000 or more.
The pitcher could sell for well above that figure if sold at an auction attended by knowledgeable Red Wing collectors.  Selling it at the annual RWCS convention auction would be ideal.  It’s too late for this year’s convention, but consider next year’s auction.  Perhaps the pitcher could be packed very well and shipped to Red Wing.  There are also other auctions periodically that feature Red Wing pottery and stoneware.  The goal is to find a knowledgeable audience because the general public won’t know anything about Buds and why it is valuable.  Antique dealers who specialize in Red Wing would be happy to buy this pitcher, but won’t pay top dollar as they need to make a profit.  Online auctions such as eBay can display the pitcher to a wide audience but there are some hassles and risks involved.  If I owned this pitcher and wanted to sell it, I would make a strong effort to get it into the RWCS convention auction.  Non-RWCS auctions that are held during convention week would be another possibility.
Larry R
40 queries in 0.562 seconds.