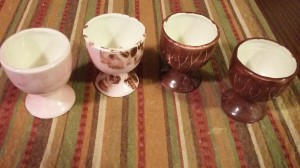 I have 5 glazed egg cups that are marked Red Wing USA, June Johnson. 4 are dated ’57, the try is dated ’58.
Can you tell me about these and their value please?

These egg cups are not part of any Red Wing dinnerware line and thus I don’t know a lot about them.  To my knowledge they were not shown in any Red Wing brochure or sales literature.  One theory says they were made for a custom order from the Old Mill restaurant.  Red Wing is known to have made an ashtray for the Old Mill, which was located in Austin, MN.

While I don’t know a lot about egg cups, I can state with confidence that these egg cups were not made by Red Wing Potteries despite the RED WING USA markings.  When Red Wing Potteries closed in 1967, the company’s molds were sold to the public with no attempt to obliterate the RED WING markings in the molds. Many of these molds went to art schools and hobby shop potters.  Non-Red Wing items formed by genuine Red Wing molds turn up fairly often but usually they are quite easy to tell from the authentic Red Wing product.  Colors and decoration are not the same. Weight is another consideration; amateur pieces are usually heavier or lighter than the original item due to the clay used to make the piece.  Amateur potters and art school students usually mark the piece with their name or initials and the year of production scratched into the wet clay.

These egg cups display several of these non-Red Wing characteristics.  The inside and bottom of the authentic Red Wing egg cups that I’ve seen are glazed the same color as the exterior; these egg cups have white interiors and bottoms.  The pink color resembles an authentic Red Wing glaze but the brown glaze does not.  The brown glaze slops over the rim and slightly into the interior.  Red Wing artists weren’t perfect but they would not produce such an imprecisely colored rim.  Finally, the name and number scratched into the clay does not fit the profile of an authentic Red Wing lunch hour piece.  The makers of lunch hour pieces used the factory’s colored glazes to mark their items.  Names and numbers scratched into the clay are essentially a dead giveaway that the item was made in an art class or by a hobby shop potter with an old Red Wing mold.

As for value, I’m sorry to say that hobby shop pieces like these have minimal value. They don’t hold much interest for collectors, though someone may be willing to pay a few dollars to add such an oddity to add to their collection.