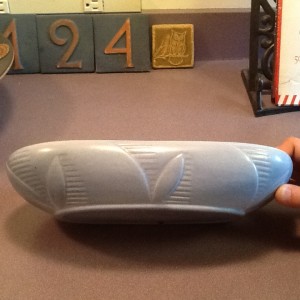 We bought this Fondoso item for $18 yesterday at a flea market. We have a considerable number of Gypsy Trail pieces, but have never seen this, and it does not appear in any of our books. We thought it might be a casserole, but the rim is not flat to support a lid and it’s a little too shallow.

The inside has cloud-like whitish areas, which may be the result of its having been used as a planter and minerals having leached out of the soil, or it might have come that way from the factory. The dimensions are 12x5x2.5.

Can you identify the purpose and name of this item, whether it is a standard piece, and its approximate value? There is no damage. Thank you.

At least three items with the Fondoso design were sold as art pottery pieces rather than dinnerware.  Thus they don’t appear with other Fondoso items in modern books and guides because they weren’t included in the vintage dinnerware catalogs that are the basis for those books.

Art pottery price lists from 1940 and 1941 include your bowl as shape 903. The price list includes only shape number and cost, so I don’t know what Red Wing may have named this piece.  Most likely it was intended to serve as a table centerpiece or planter.  Shape 904 was a pair of candlesticks with the Fondoso design (similar in size and shape to the small Fondoso salt & pepper shakers).  Shape 974 was an 8.5 inch bowl, which was essentially a Fondoso casserole without a cover.

The white areas inside your bowl are residue from a previous use, most likely as a planter.  This is a common issue with planters and vases.  The value for a 903 bowl in excellent condition is around $50.  The whitish residue may reduce the value somewhat.