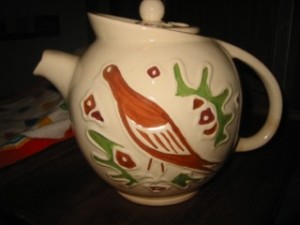 Maybe ten years ago, a street person from my neighborhood here in Washington, DC offered me two boxes of assorted glass/ceramic items for $6. An inveterate scavenger, of course I took the deal.

As it turned out, he had scooped these boxes up from an alley trash pile. The story goes that a widower cleaned out his deceased wife’s possessions, and apparently she had traveled around the area buying things, including a lot of teapots. Some were by Sadler, some by Hall, some by other companies I don’t recognize. I found a lot of price stickers in the $20-25 range, and a few receipts from PA and MD shops dated in the 1980s.

Amongst this little collection (my heart breaks when I wonder what had already been hauled away to the landfill), I found this teapot, which says Red Wing on the bottom. Knowing nothing about Red Wing, I have no idea whether it’s legit or not.

I can’t say the design – or its rather primitive execution – really appeals to me aesthetically, but there is something about its humble clumsiness (the poor beakless bird with its sloppily painted feathers, the raised design whose edges are neither crisp nor well defined) that makes me like it anyway. I imagine some worker, forced to take his/her grade school kid along to work that day, pulling out a brush and some paint and saying, “Have at it.”

If you can tell me something about this piece – anything – I would be grateful.

Red Wing Potteries produced dinnerware from the early 1930s until 1967.  Early dinnerware was glazed in a wide range of solid colors.  In 1941 Red Wing introduced its first dinnerware with hand painted artwork.  Over time this feature became a well-known hallmark of Red Wing dinnerware.  Artwork was applied in assembly line fashion by local girls and young women hired for that purpose.  Painters were each given one or two colors to add to each piece as it passed on down the line.  The three colors on your teapot were likely applied by three different painters.

In the mid 1940s Red Wing produced three tea sets, each consisting of a matching teapot, sugar and creamer. These sets do not belong to any dinnerware pattern, they are simply stand-alone tea sets. Most likely these three tea sets were sold as giftware. To my knowledge these tea sets have not been identified in a Red Wing catalog or price list so we don’t know their official names. Collectors sometimes refer to this teapot as a “figural bird”. I would put the value for this teapot in the $30 to $40 range, assuming excellent undamaged condition. While this teapot can be fairly difficult to find, it also does not seem to be in high demand so the value is rather low relative to teapots in the more popular dinnerware patterns.

By the way, the bird does have a beak.  The feet and beak are present in the bird’s raised figure but aren’t painted, they were left white because that’s how the teapot was designed.  This was not an oversight on the part of the painters.